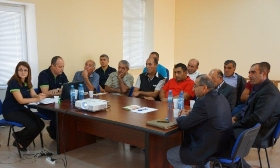 In the frames of “Borrow Wisely” campaign “Farm Credit Armenia” credit cooperative organized seminar-discussions in “Artashat” and “Ejmiatsin” branches on October 2nd and 9th respectively.
Being led by the management of the cooperative – Chief Executive Officer Armen Gabrielyan, Chief Risk Officer Anahit Orbelyan and Chief Operating Officer Mushegh Petrosyan, the seminar was organized for the member shareholders of the cooperative. During the discussions CEO Armen Gabrielyan welcomed the participants and presented the aims and role of the “Borrow Wisely” campaign. He also stressed that FCA pays special attention to responsible lending and transparency while conducting its mission.
In addition to the thorough discussions on the topic, FCA staff handed in the participants various informative materials, including booklets, posters and leaflets. The participants were satisfied by their content, as well as the slogan of the campaign, “Control Debt – Don’t Let It Control You!”, s

tressing that this type of materials help them avoid unprofitable credit deals and offers. They also welcomed the initiation of “Farm Credit Armenia” in organizing such kind of informative events.
Next seminar–discussions in the frames of “Borrow Wisely” campaign will be held on October 16th in “Masis” and on October 23rd in “Armavir” branches.

Back to previous page