HISTORY OF OUR COOPERATIVE 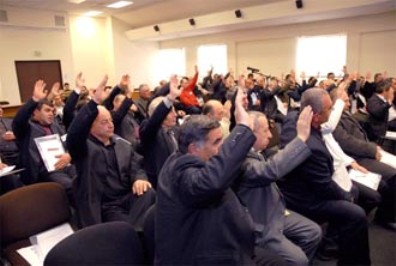 In July 2005, during a Center for Agribusiness and Rural Development (CARD) Foundation Strategic Planning meeting, the head of the Foundation’s loan department, Armen Gabrielyan, presented a proposal to develop a cooperative lending institution with the owners, users and beneficiaries being Armenian farmers, agribusiness persons and small- and medium-enterprise (SME) owners.  Since the U.S. Department of Agriculture (USDA) was providing financial support for the implementation of various agricultural programs in Armenia through CARD, a proposal was submitted for preliminary review by the U.S. Farm Credit System (FCS) and the Farm Credit Administration (FCA) in November 2005.

In September 2005, within the scope of the United States-Armenia Economic Task Force held in the United States, the Republic of Armenia’s Minister of Agriculture met with the USDA Secretary of Agriculture and leaders of the FCA. After becoming familiar with the FCS’ cooperative lending principles and as a result of a bilateral oral agreement, the Ministry of Agriculture and USDA agreed to investigate the creation of an independent and sustainable rural cooperative financial system in Armenia, with initial support by the USDA.

Starting in November 2005, FCA launched a program of technical assistance upon the request of the USDA’s Foreign Agricultural Service to further explain and explore how the U.S. FCS’s working principles and specifications would work in Armenia. The monitors were from the FCA, and they endorsed the idea and necessary support to establish the “Farm Credit Armenia” cooperative credit organization in Armenia.

Farm Credit Amenia held its founding meeting with 57 farmers and the Trust Foundation of the U.S. Farm Credit System. The Armenian farmers elected a board of directors and a nominating committee. The board is composed of one person from each of the five regions served by Farm Credit Armenia and an independent outside director. The Board Chairman is Seryozha Hayrapetyan and the Chief Executive Officer is Armen Gabrielyan.

Farm Credit Armenia was chartered by the Central Bank of Armenia in September 2007. It leases offices at 18 Khajaznuni St., Yerevan, and began making loans to farmers and rural SMEs in December 2007.